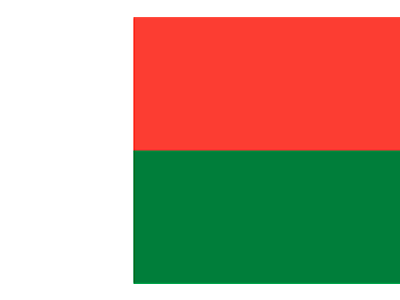 The flag of Madagascar was adopted on 14 October 1958, two years before the independence of that nation, as Madagascar prepared for a referendum on its status in the French Community.

The colors of the flag represent Madagascar's history, yearning for independence, and traditional classes. Red and white were the colors of the Merina kingdom, which succumbed to France in 1896. They were used in the flag of the last Merina monarch, Queen Ranavalona III. They may indicate the ethnic origins of the Malagasy people in Southeast Asia, and are shared by the flag of Indonesia. Green was the color of the Hova, the largest class of peasant commoners, who played a significant role in anti-French agitation and the independence movement.https://en.wikipedia.org/wiki/Flag_of_Madagascar