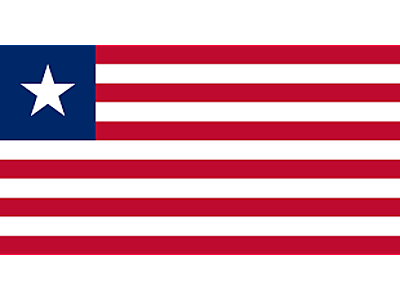 On 26 July 1847 the Liberian Declaration of Independence was signed and Liberiabecame a sovereign nation.

The story of Liberia is different from other African countries because of its bond with the United States (US). The country was one of only two countries in sub-Saharan Africa, along with Ethiopia, without roots in the European Scramble for Africa.

Slaves freed from slave ships were sent to Liberia instead of being sent back to their countries of birth - these colonists formed an influential group in Liberian society and in 1847 they founded the Republic of Liberia and instituted a government modelled on that of the US.

American-born Joseph Jenkins Roberts became the first President of Liberia and the capital city, Monrovia, was named after James Monroe, the fifth president of the US. The Liberian flag is similar to that of the US: the red and white bands symbolize the 11 men who declared independence by signing the Liberian Declaration of Independence, the white star symbolizes the freedom the ex-slaves were given and the blue square symbolizes the African mainland.

Liberia: History of the Origins of War and Profiles of Actors

The cause of the civil war in Liberia can be traced to the country’s unresolved ethnic and political...

On 26 July 1847 the Liberian Declaration of Independence was signed and Liberiabecame a sovereign...