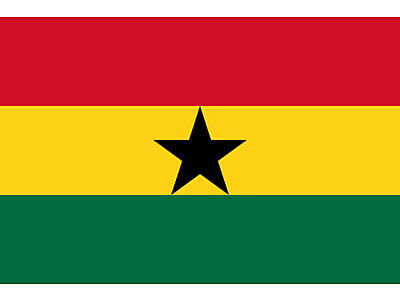 Ghana's economy is the second biggest in West Africa and it is booming helped by strong exports of cocoa, gold and oil. Ghana is one of Africa's most established democracies with a history of free elections and changes in government between the main parties.

The launch of crude oil production at the Jubilee oil field in 2011 combined with a strong performance of the gold and cocoa sector boosted Ghana's real GDP growth to 15% in 2011 and 7.9% in 2012. Ghana hopes that this growth will be sustained with the help of an expanding service sector. The economy continues to attract FDI, aided by the prospect of rising oil and gas production.

Although the country is experiencing rapid growth, Ghana is running a large fiscal deficitand a large balance of payments deficit. Despite growing revenues from the oil and gas sector the fiscal deficit jumped to 11.5% of GDP in 2012 as the government increased spending on public sector wages and subsidies before the 2012 election. Public debt level rose to 56% of GDP in 2012, up from 33% of GDP in 2008.

Largely owing to high capital imports for the development of infrastructure and the oil sector the current account for Ghana has been in deficit for the last decade. The deficit is expected to reach 11.6% of GDP in 2013. External debt is also on the rise climbing to 34% of GDP in 2013.

Ghana's export base is concentrated on commodity exports with gold, oil and cocoa accounting for 75% of total exports.

A prolonged period of low world commodity prices would put further pressure on the country's external and fiscal accounts. In their report on the Ghana economy published in 2013, the IMF reported "the concentration of exports in three commodities—gold, cocoa, and oil—makes the economy vulnerable to terms of trade shocks." Indeed in 2014, Ghana had to ask for IMF support because of its unsustainable balance of payments deficit.

Increasing wages and energy prices and the effects of a weakening currency that increases import prices has meant that inflation in Ghana has increased to a 3-year high of 11% in May 2013. Ghana's currency has been one of Africa's worst performers in recent times, depreciating by a sizeable amount against the US dollar. Ghana's central bank has increased interest rates from 15 per cent to 16 per cent, stepping up its efforts to halt the decline of the cedi.

Rapid growth has helped to lift per capita incomes - Ghana has made great strides in reducing poverty to less than 30 percent of the population and has recently reached lower middle–income status. But Ghana's widespread relative poverty, illustrated by children hawking food on the streets at night to support their families, is equally striking. About 52 per cent of Ghanaians live on less than $2 a day, another 27 per cent on between $2 and $4.In between the two extremes is an “emerging market middle class". The African Development Bank estimates that nearly one in five Ghanaians, or 4.6m people, is now either lower or upper middle class by its definition, with a per capita daily consumption of between $4 and $20.

The IMF analysis concluded that "Better infrastructure, improved access to credit, further investment in health and education, and sustained macroeconomic stability will be central to ensure Ghana's continued robust and inclusive growth."

In the multilingual nation of Ghana, nearly 80 languages are spoken throughout the country....