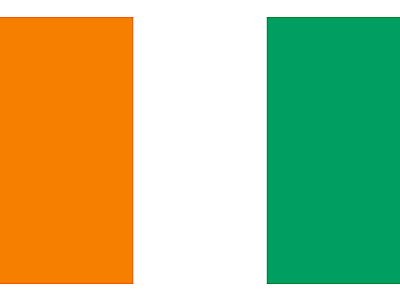 Ivory Coast, also known as Côte d'Ivoire and officially as the Republic of Côte d'Ivoire, is a sovereign state located in West Africa. Ivory Coast's political capital is Yamoussoukro, and its economic capital and largest city is the port city of Abidjan. Its bordering countries are Guinea and Liberia in the west, Burkina Faso and Mali in the north, and Ghana in the east. The Gulf of Guinea (Atlantic Ocean) is located south of Ivory Coast.

Prior to its colonization by Europeans, Ivory Coast was home to several states, including Gyaaman, the Kong Empire, and Baoulé. Two Anyi kingdoms, Indénié and Sanwi, attempted to retain their separate identity through the French colonial period and after independence.[7] Ivory Coast became a protectorate of France in 1843–1844 and later a French colony in 1893 amid the European scramble for Africa. Ivory Coast achieved independence in 1960, led by Félix Houphouët-Boigny, who ruled the country until 1993. The country maintained close political and economic association with its West African neighbors while at the same time maintaining close ties to the West, especially France. Since the end of Houphouët-Boigny's rule in 1993, Ivory Coast has experienced a coup d'état, in 1999, and two religion-grounded civil wars. The first took place between 2002 and 2007 and the second during 2010–2011. In 2000, the country adopted a new constitution.

Ivory Coast is a republic with a strong executive power invested in its President. Through the production of coffee and cocoa, the country was an economic powerhouse in West Africa during the 1960s and 1970s. Ivory Coast went through an economic crisis in the 1980s, contributing to a period of political and social turmoil. In the 21st century the Ivorian economy is largely market-based and still relies heavily on agriculture, with smallholdercash-crop production being dominant.

How Much Ivory Is in the Ivory Coast?

Months of armed conflict in the Ivory Coast may soon come to a close, as president Laurent Gbagbo,...