The role of civil society in Somalia’s reconstruction: achievements, challenges and opportunities 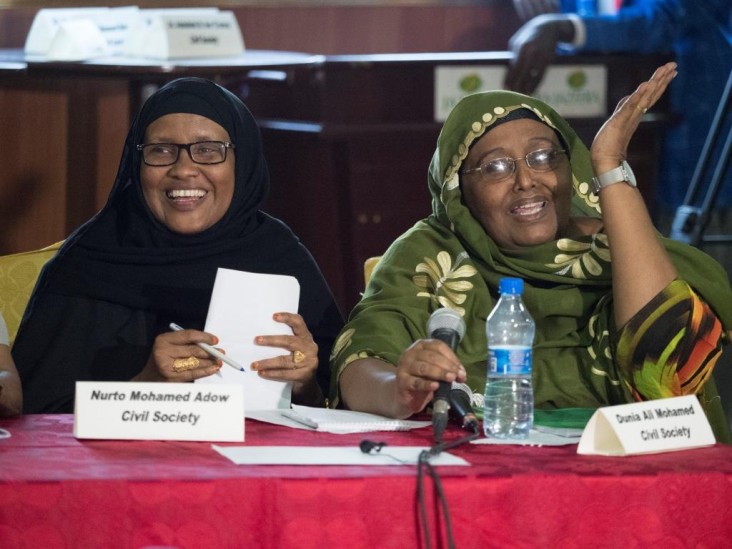 Somali civil society has played an important role in service delivery for decades but is beset by challenges that have hindered progress on a number of issues. Feysal Osman argues that there are three key areas that need to be addressed.

After the collapse of Somalia’s central government in 1991, civil society organisations (CSOs) stepped in to fill the governance vacuum and provide vital services. They have played a number of important roles – from supporting peacebuilding and conflict prevention to promoting democratisation and providing humanitarian aid. Even since the return of a functioning central government in 2012, CSOs have continued to demonstrate their value as facilitators, advocates, election observers and innovators. Many are striving to become financially and politically independent institutions, acting as watchdogs, ethical guardians and advocates for the marginalised and under-represented.

As the political context has evolved, so too has the role of CSOs. The challenges they now face largely revolve around three themes: differing interpretations of ‘civil society,’ the absence of a unified civil society voice, and internal governance challenges.

In Somalia, the term ‘civil society’ – also referred to as ‘non-state actors (NSAs)’ by some – is seen as encompassing far more than a collection of non-governmental organisations (NGOs), community-based organisations (CBOs), professional associations and institutions. The term describes an ever-growing group that includes the private sector, media, teachers, lawyers, medical practitioners, journalists and traditional elders.

While many Somalis believe that civil society serves the interests of all citizens and acts as a counterweight to the government, others find the concept to be alien or driven by donors and western interests. “Traditionally, clan elders have been the core of civil society in Somalia,” said Abdullahi Jama, who manages a CBO in Kismayo. “They have been mediators between society and authorities in the social and political spheres of Somali society.” To some Somalis, today’s CSOs are too top-heavy and mainly represent donor interests.

There is also a disparity between what the international community expects and what Somalis see as the role of civil society. “There are ideals and realities of Somali civil society which don’t conform to each other,” said Ahmen Keyse, an independent consultant. “There needs to be a change in local perceptions of CSOs; in other words, CSOs need to advocate for themselves before advocating for others.” INGO worker Mohamed Yusuf believes that “Internal reform of the current CSO leadership structures is necessary before there can be wider agreement. Inclusive representation, particularly giving a chance to marginalized groups, including women, youth and unrepresented minority groups could boost CSO’s public standing.”

According to Abdirahman Ozman, a researcher based in Nairobi, local manifestations of Somali civil society might be different from those imagined by outsiders. “There are numerous experiences of outside supporters of Somalia CSOs becoming frustrated because local CSO partners turned out to be politically biased or unreliable, primarily serving the interests of their beneficiaries and at times favourite political groups or even being as ruthless as the governments they are supposed to counterbalance.” While many Somali intellectuals and international partners assumed that civil society would act as the eyes and ears of the international community – monitoring human rights, advocating for disadvantaged groups and providing early warning for conflict – this has not always turned out to be the case.

“CSOs played a major role in the peacebuilding process in Somalia and could act as the only major unifying factor in the country,” said Mohamed Ali, who works for an NGO based in Mogadishu. “However, Somalia’s adoption of a federal system has polarised already fragile CSOs into fragmented, competing and disempowered regional blocs. The line is now blurred between the new and emerging state-level CSO networks and their state politicians.” The emergence of grassroots CSOs that can be divided along regional or political lines – and are often associated too closely with their political leaders – is further changing how Somalis see civil society. “There are competing interests and groups under the CSO umbrella, and women are largely side-lined in the highest circles of decision-making,” said Asha Ahmed, a former CSO worker. Others like Mohamed Ahmed, a university teacher, argue that it is even becoming difficult to distinguish between ‘state’ institutions and civil society in some areas.

Clan affiliations are strong in Somalia, manifesting through different institutions and even within civil society. For example, some diaspora-funded NGOs are established along clan lines and mainly run projects in areas to which certain families can trace back their lineages. This is hardly surprising. For many CSOs that attempt to cut across clan lines and bring about positive change, clan politics can get in the way. Because of this reality, many CSOs cannot escape becoming aligned with one group or another, either in reality or in perception. Somali CSOs are often seen as either supporting the state administration or the opposition party or clan, depending on who is leading the organisation at the time. This is especially true when the government engages on politically sensitive topics, such as elections, boundaries, clan disputes, or resource sharing.

The manipulation of clan identity can either lead to positive or negative consequences. Many politicians have taken advantage of nearly three decades of instability in Somalia to provoke historical grievances and create divisions among communities that help them keep their grip on power. Others, meanwhile, have used ethnic identity as a unifier among communities to create trust, safety and cultural intimacy, and to build effective networks that provide access to development projects. So the absence of CSOs that are neutrally perceived and that can transcend clan divides and interests is threatening the whole purpose of having CSOs, undermining the essence of community cohesion.

Civil society largely emerged during the civil war and mostly in reaction to the agenda of international donors. They continue to depend on external support – a fact that runs counter to the desired bottom-up approach upon which many civil society groups were founded. But, many CSO strategies remain the same as when they began, and their activities and funding sources are largely project-based and ad hoc, hindering their ability to secure independent funding. Due to limited funding sources and fierce internal politics and competition, staff turnover is high for many CSOs. “There is a lack of communication and consultation within and among CSOs; it is no secret that often, a particular interest group of the same clan, who occupy the highest positions, call the shots on sensitive decisions” says Amina who worked for a CSO.

The often-imagined ‘ideal’ of a CSO that represents everyone’s interests is difficult to achieve. Most of the work of Somali CSOs focuses on urban capitals, with acceptance from communities varying widely. Many CSOs are seen as promoting western models of state-society relationships or as rubber stamps for the government, depending on their clan and power dynamics.

In Somalia, it is hard to find a completely non-partisan CSO that has total legitimacy and acceptance among different communities. Therefore key challenges for development partners such as the EU, Saferworld and others in supporting and strengthening civil society is how to navigate the complex challenges of ethnicity and clan, how to build the capacity of civil society and how to identify reliable CSOs as partners. This requires a nuanced understanding of specific civil society groups in the Somali context and in the specific areas in which they operate.

At the state level, more indigenous types of CSOs have recently started to emerge. In order to engage them effectively, international groups should learn more about how they develop, how they acquire legitimacy, what accountability mechanisms they have in place and how they manage their relationships with state authorities and the federal government. While the spontaneous, bottom-up formation of CSOs sets a great precedent, CSOs that already exist at the national level need to work together to create cohesion and display a coordinated front.

Somali civil society has an important role to play in promoting inclusion, trust, dialogue and reconciliation, all of which are essential to building bridges in a polarised society. But to be as effective as they can be, CSOs should democratise, improve their representation of women and minority groups and showcase the same values they want the government to embody.

Local, state and federal governments, instead of treating civil society with mistrust and exploiting ethnic divisions, should allow space for CSOs to mediate between the government and the public. Civil society can promote citizens’ exercise of their rights and responsibilities while fostering open channels of communication that allow governments to hear and act on public concerns.