The Sustainable Development Goals (SDGs) set ambitious targets for countries and societies to improve lives and livelihoods around the world. While the expectations of meeting these goals largely fall on governments, it is widely recognized that joint efforts by citizens and their governments will be needed to achieve the best outcomes. Citizen action takes place in many forms and forums, including organizing and working together on shared goals, providing mutual support and assistance, campaigning or advocating for shared needs, and engaging with governments, making demands on them, and holding them to account. While some citizens may become involved in a formal capacity, such as through paid employment in nongovernmental advocacy or service organizations and through employment with governments or other service providers, large numbers will – and must – be engaged in a voluntary capacity. Understanding the nature of this voluntary engagement is a key goal of this analysis. 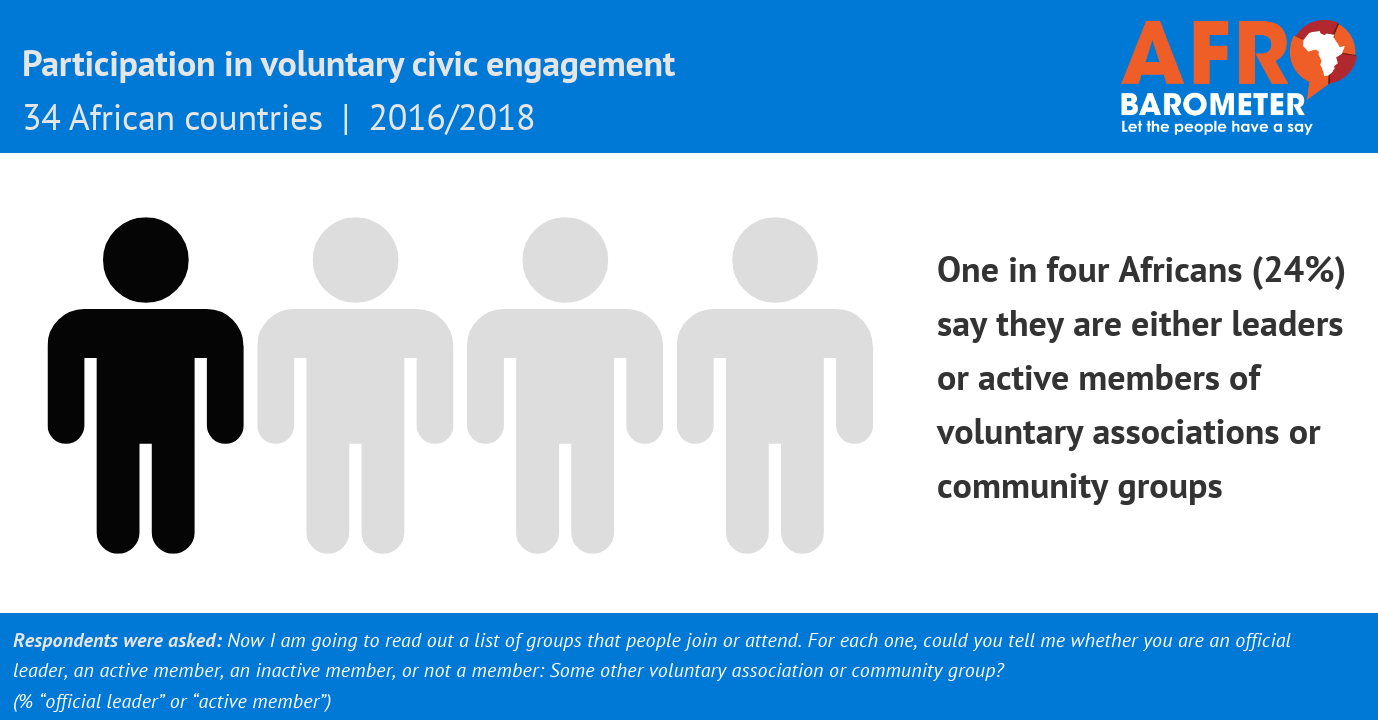 Advocates of volunteerism in Africa have been plagued by a lack of data on who engages in voluntary service, how much they contribute, in what formats, and what the outcomes are. Only a handful of governments have collected data on this topic. Yet our ability to foster and build support for volunteerism is partly dependent on how well we understand the ways people are already engaging every day in these critical but uncompensated contributions in pursuit of the public good.

Afrobarometer data can help to fill this void. Although Afrobarometer has not collected data with the explicit aim of studying volunteerism, for more than 20 years it has captured extensive, nationally representative data on respondents’ levels of political and civic participation (much of which can be classed as volunteerism) across seven rounds of surveys in 38 countries. This includes membership in religious and civic organizations and participation in individual and collective efforts to engage with leaders and to voice community needs. In particular, in addition to membership in associations, Afrobarometer tracks the contact of respondents with political and community leaders, their attendance at community meetings, and their efforts to join with others to address issues or express their views. These kinds of civic engagement are the cornerstone of volunteerism to solve problems and improve lives.

Understanding who engages, under what circumstances, and why provides a foundation on which to more effectively promote civic engagement and volunteerism in pursuit of the SDGs and other development objectives. This paper explores Afrobarometer data on civic engagement with four main goals:

Our analysis identifies several factors that shape voluntary civic engagement, from socio- demographic ones such as education and wealth to citizens’ socio-political engagement, their personal sense of efficacy, and their overall trust in their governments. Country contexts are important, as we see wide cross-country differences in levels of volunteerism. Among other aspects, wealthier countries, on average, report less volunteerism, while democracies report more. We have found evidence that confronting unmet needs – whether one’s own or those of others – is a major motivating factor of voluntary engagement. These findings suggest a number of opportunities and entry points for increasing citizen engagement.

The paper is organized in four parts. Part A begins with a discussion of knowledge on volunteerism and participation, highlighting the lack of evidence and data sources on Africa and how civic engagement intersects with volunteerism. Part B develops descriptive profiles of the participants in voluntary civic engagement. Part C explores key driving factors at the individual and country levels. The final section presents recommendations for acting on these findings.

A Guide to Regenerative Governance

Published by Civicus 3 October 2018 Republished with permission from Civicus Media By...